Chances are that in every major city you’ll likely find landmarks that draw tourists by the dozen, you probably know them by now, those places that often come up on touristic brochures for each city and are deemed must-see attractions. And sure, there is nothing wrong with wanting to see those renown places. Part of getting to know a city is to see its most famous places, but you know… for every renown landmark, you can also find a strange, semi-unknown and unique places that are filled with local enchantment. This is true for most cities but I would dare to say that in Atlanta, Georgia the weird little places are just as worth visiting as any of the landmarks so, come on! Let’s explore some of Atlanta’s most wonderfully weird sites, and heck a couple of its must-see places too!

But first a little bit of advice, some of the sites we’re going to see are scattered around the city so if you want to see them all, you probably should consider your transportation options as public transport may not get you to some of these sites. Renting a car in Atlanta might be a good option as it let you get to those weird places on your own, plus you and your travel group will be way more comfortable as there are all types of available vehicles to choose from.

Imagine you’re walking on the street, minding your own business and out of nowhere you notice a tiny door in the street. This tiny door is just like any beautifully decorated door from any normal house or store, except its tiny and in the middle of a random street. It seems as if this door was a passage to a hidden tiny Atlanta inside of real size Atlanta, but in reality, this is one of many tiny doors that are scattered around Atlanta as part of a street art exhibit, aptly named Tiny DoorsATL.

There a 17 of these awesomely weird pieces of art, including a gigantic door that will make YOU feel tiny. If you really want to get to know Atlanta and love street art then there are 17 sites around the city waiting for you to discover them, it takes a little urban exploring to find them but if you want to there are also some tours you can take. I don’t want to spoil the door hunt for you but I can tell you that there’s one at the Georgia Aquarium (A weird site inside of a landmark, Atlanta is just cool like that!).

Georgia Aquarium and the World of Coca-Cola

Speaking of the Georgia Aquarium… we simply cannot visit Atlanta without paying respect to its landmarks. And as luck would have it, we can find two of them right next to each other! So, as a palate cleanser, let’s take a break of the weirdness to see them. I’m speaking of course about Georgia Aquarium and the World of Coca-Cola, two of Atlanta’s must-see attractions.

Now Georgia Aquarium is the largest aquarium of its type in the western hemisphere, it’s so large in fact that it houses whale sharks! But of course, there are also many other exhibits dedicated to all other types of aquatic life… which in a way it’s pretty fascinating since Atlanta is nowhere near to the sea.

On the other hand, we can find the World of Coca-Cola, a museum dedicated to the world’s most popular soft drink which is fitting since Coca-Cola was born here in Atlanta. In this museum, you can find paraphernalia from all the history of Coca-Cola as a brand, and there’s also a room where you can try soda flavors from all around the world!

You can find both attractions in the same park at Baker St NW and you can probably see them both in a single day!

All right back to the weird stuff. People often forget that when it comes to worldwide health efforts, Atlanta is one of the most important cities in the world. That’s because Atlanta harbors the Center for Disease Control or CDC for short. When a new pathogen threatens humanity, Atlanta is the first city to respond and there is a museum dedicated to the CDC’s efforts in keeping the world a little healthier.

In here you can see the history of the CDC and their fight against some of the world’s most fearsome diseases. There are also see some amazing temporal exhibits that rotate now and then, and in some occasions you can even assist to some interesting conferences with experts.

You can find the museum at 1600 Clifton Rd, and best of all, both the entry and parking lot are free! This is a little bit away from other attractions, but if you rented a car in Atlanta getting there won’t be a problem.

Do you like shopping? Do you like weird stuff? You like shopping for weird stuff? Then there’s a place just for you here in Atlanta: Junkman’s Daughter. This is a shop that sells a wild assortment of peculiar items, from unique clothing to disguises to all sorts of oddities and other paraphernalia. All with an interesting colorful kitsch ambiance.

The shop is really hard to miss as its exterior is covered by an awesome mural which was designed by a tattoo artist, there’s even a UFO prop at the entrance of the shop! Junkman’s Daughter is in 464 Moreland Ave, at the heart of Little Five Points, a commercial district that has become Atlanta’s center for alternative culture, so if you like weird places to visit this is probably the first of many in this district. There is also a lot of restaurants spread along the district so let’s see one of them before ending our tour of weird things to see in Atlanta. And we go straight to:

Not too far from Junkman’s daughter, we can find Savage pizza. A quaint little superhero themed pizza restaurant. Here you can what many customers describe as the best pizza in Atlanta. The ambient is described as fun and colorful and the and the service is described as very fast and friendly. There’s tasty and diverse pizza flavors and also other options such as calzones, subs, and salads.

So that’s it, a little piece of Atlanta for you. It doesn’t matter if you’re searching for must-see attractions or hunting for hidden gems, Atlanta has both, and believe me there is so much more to see, so come on Atlanta is waiting! 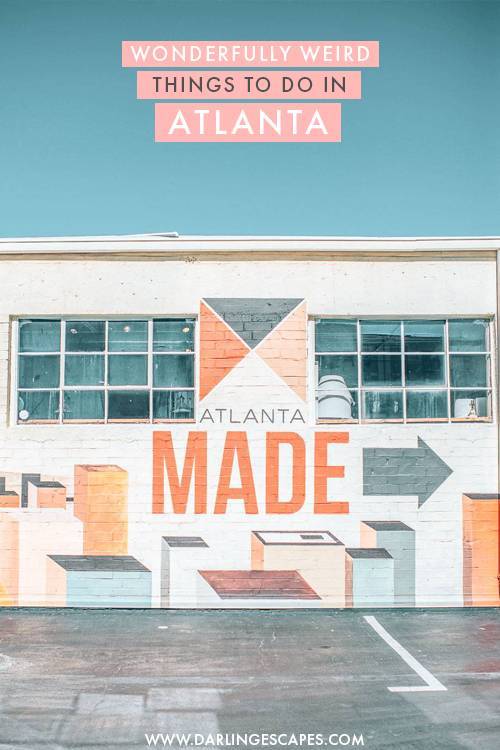