No trip to Southern California would be complete without a road trip through the desert. The California desert is truly unique. It is full of both natural and man-made wonders. From breathtaking national parks to quirky roadside attractions, the desert truly has something for everyone. It is beautiful, unusual, and most importantly, very instagrammable! Get your camera out, book a  rental car and let’s talk about the California desert’s most instaworthy locations.

All these make for amazing desert photoshoot locations near Los Angeles. Pioneertown, for instance, is a mere two hour drive outside the city and Cabazon Dinosaurs even less. Rent a car and make some day trips from LA out of it after you’ve checked out all the fun things to do in LA. 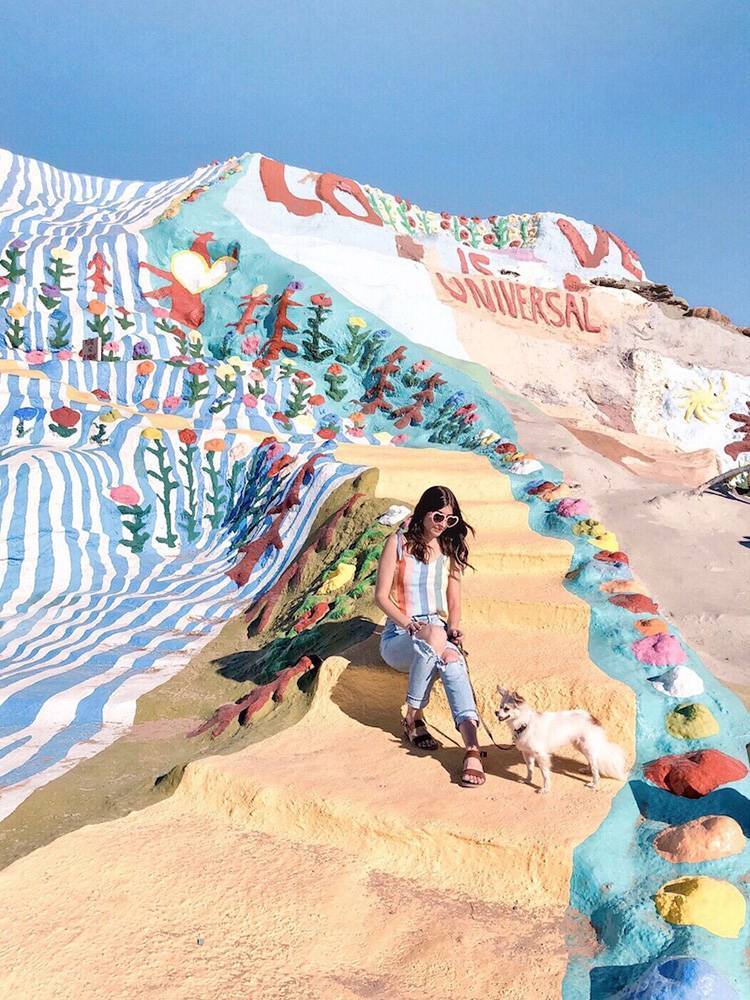 Salvation Mountain is a painted hillside, located in the city of Niland, about 90 minutes east of Palm Springs. It’s creator Leonard Knight, who has since passed away, decided he wanted to spread a message of love after having a religious epiphany. Knight built the mountain with adobe clay, straw, and donated paint. It took him about three decades to build and he used an estimated 100,000 gallons of paint over the years. It has since been listed in the Congressional Record as a national treasure and is a must-do on your desert road trip.

Salvation Mountain is located near a community called Slab City. Slab City was once marine barracks during WWII, but after being abandoned, the only remnants are concrete slabs, hence its name. It is now occupied by a completely off-grid community. The site is completely uncontrolled, meaning no electricity, no running water, and no trash pickup. Most people come to live there during the winter months, but there are about 150 permanent residents that live there year-round. 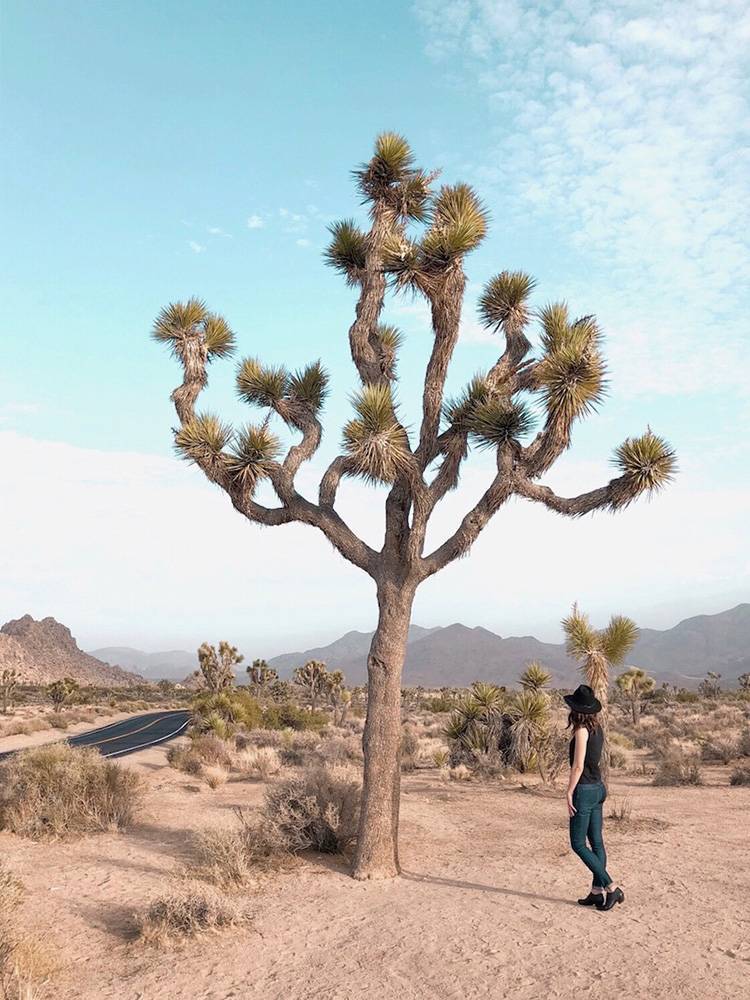 ALSO READ:
7 Super Cheap Places to Travel in the U.S.

Joshua Tree is a national park in California’s desert that I visit often. It’s an unusual park, but that is one of the reasons why it’s such a great park to visit. The park lies where two deserts meet – the high Mojave Desert and the low Colorado Desert, creating two very different ecosystems. The Colorado half has very little vegetation, but as you reach the Mohave, you’ll begin to see the Joshua trees that the park is named after.

Joshua trees are a specific kind of Yucca tree, prevalent in the Mojave Desert. The odd trees look like something out of a Dr. Seuss book. The spiky trees usually only grow 0,5-3 inches a year and can take 50 to 60 years to reach maturity. The tallest tree in the area stands at 40 feet high and some of the trees in the park may be around 150 years old.

The Cabazon dinosaurs are located just outside of Palm Springs and can be seen as you are driving along the 10 freeway. The two huge, steel and concrete dinosaurs have appeared in a handful of films, the most well-known being, Pee-Wee’s Big Adventure. They are one of my favorite roadside attractions. They are named Dinny the Dinosaur and Mr. Rex. You can climb all the way up to the mouth of Mr. Rex, who is 65 feet tall! Dinny, the Brontosaurus, is 150 feet long.

The artist, Claude Bell, was a sculptor for the amusement park, Knott’s Berry Farm. He began construction on the dinosaurs in 1964, as an attempt to attract more business to his restaurant. The restaurant closed in 2013 and the property was sold. Today a creationist museum and gift shop occupy the property. 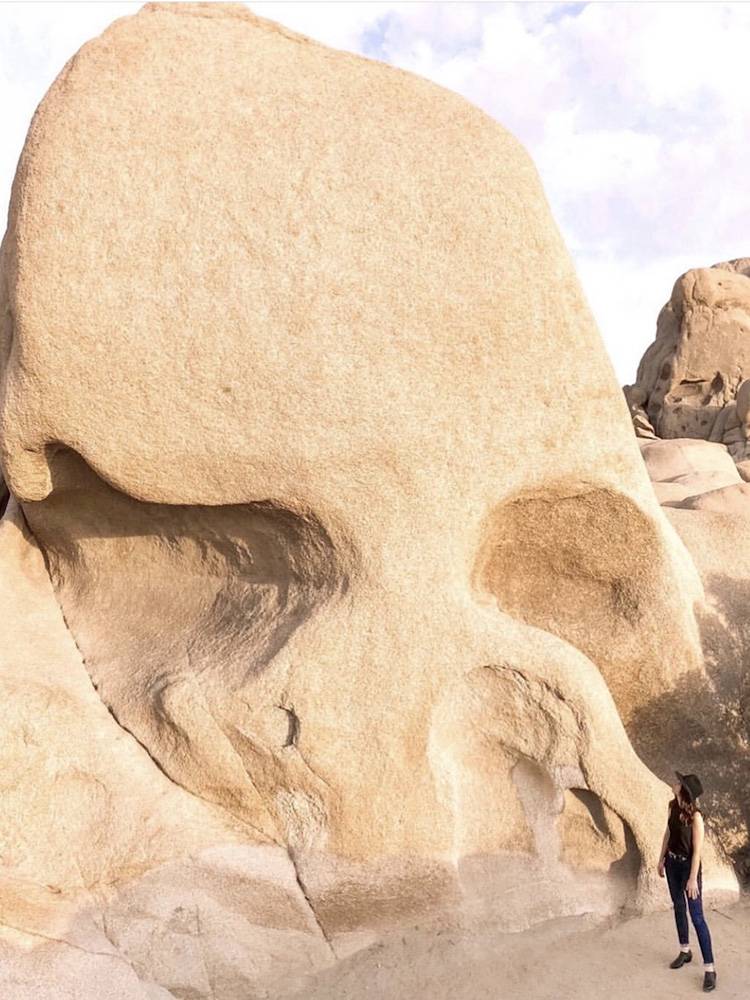 Skull Rock is a popular spot within Joshua Tree National Park. It is a large granite rock, that has begun to resemble a skull over the years. Rain water has caused erosion to take place, forming two large ‘eye sockets’ on the rock.

It is located in Twentynine Palms – just a few feet from the main road that runs through the park and there is plenty of room to park your car. The surrounding area is fun to explore as well. There are lots of huge boulders and some nearby hiking trails.

Desert Christ Park is a sculpture garden located in town of Yucca Valley. It is spread out over three and a half acres of land. The sculptures were built in the 1950s by Frank Antone Martin. He began their construction soon after WWII and intended them to be more of a statement of peace, rather than religion. There are about thirty-five biblical figures scattered throughout the hillside. The large figures are made out of steel-reinforced concrete and include Mary, The Twelve Apostles, and a ten-foot-tall, three-ton statue of Jesus.

In 1992, an earthquake, with a magnitude of 7.3, rocked the area of Yucca Valley and resulted in missing limbs/ and or heads for many of the statues. A non-profit has since taken over the park and cleaned up the area. Desert Christ Park is free and open until dusk, and renting a car will make it easier to get here. 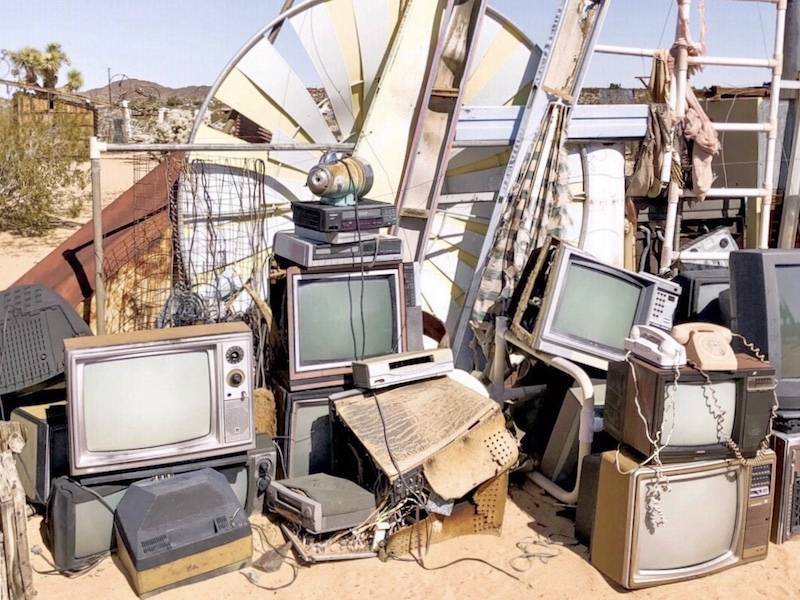 ALSO READ:
8 Best Cities for a Girlfriend Getaway within the United States

Noah Purifoy was a visual artist and sculptor, who spent the later part of his life in the Joshua Tree area. He dedicated his last fifteen years to creating The Noah Purifoy Desert Art Museum. His art is made from found objects, or as many would call it, “junk”. As far as materials go, he took whatever he could get. His works are made from a variety of items, including broken electronics, furniture and even a toilet. The museum sits on 10 acres of land and contains about fifty different pieces.

At first glance, Noah’s art appears to be just a bunch or random items put together, but every piece has a very intentional meaning. Many of the pieces have a political message behind them. He also intentionally chose the desert as a home for his art because he believed the decay, resulting from the rough desert climate, would only enhance his works. 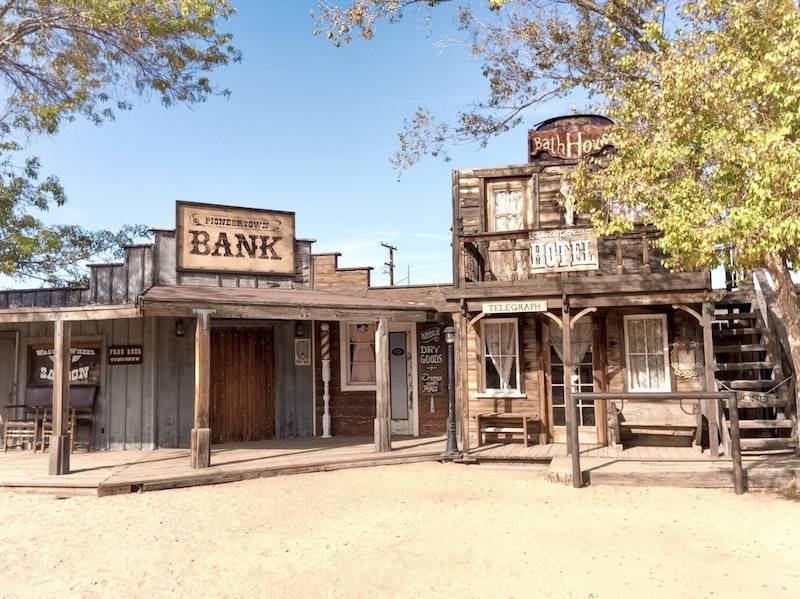 The small town of Pioneertown was built in 1946 as a functional movie set, where a number of westerns were filmed during the 1940s and 1950s. It was built by a group of Hollywood investors, which included Gene Autry and Roy Rogers. They wanted to create a movie set that could double as an actual town. The outside of the buildings was a facade, but on the inside, there were things for visitors, such as an ice cream parlor, bowling alley and a motel.

Many of those things no longer exist, but it’s still a fun place to explore and take some photos! Today, there are a couple shops that occupy the buildings and if you need a fun place to stay, check out the Pioneertown Motel. It was originally part of the set but was recently renovated. Pappy & Harriet’s is also a great place to spend an evening. It’s a restaurant and music venue, known for its BBQ and the great music acts it brings in. Pioneertown is located about 15 minutes from Joshua Tree, near Yucca Valley.

Sitting along the roadside in Yucca Valley are two giant cacti. They are the largest cactus that I have ever seen, making it a fun and instaworthy stop.

The cacti can be found along the main highway, in front of a barber shop, named A Barber For Men And Women. The taller of the two cacti is probably close to 15 feet tall. You’ll be able to easily spot them on your way to Joshua Tree National Park. 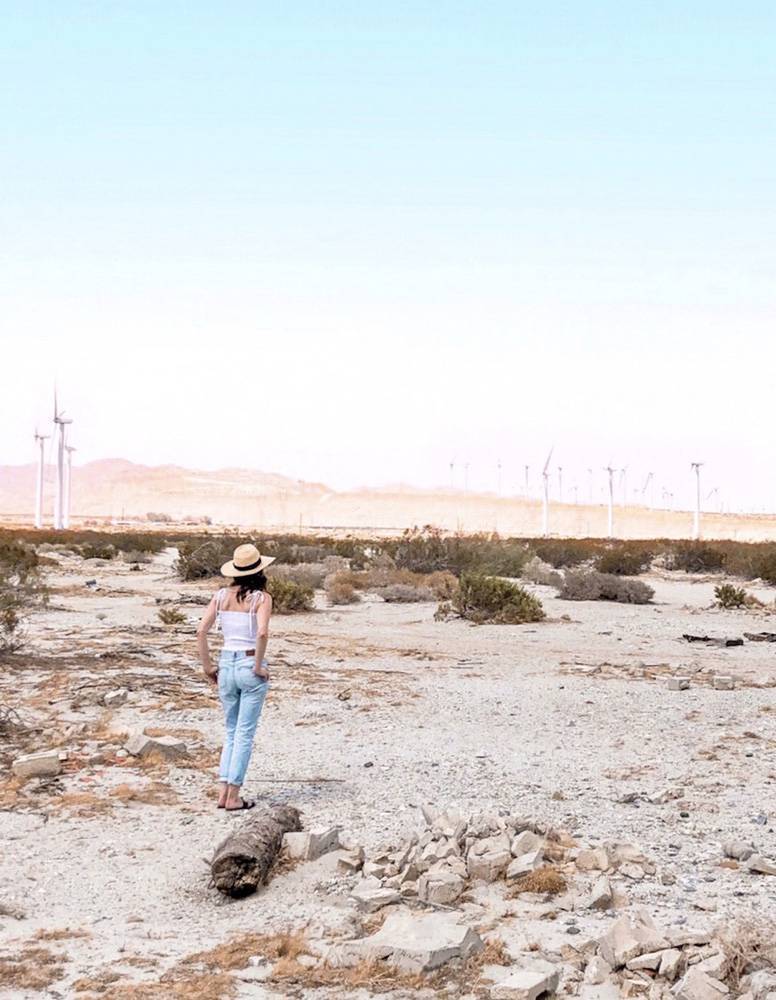 When driving to Palm Springs from Los Angeles, the first sign you’ve reached the desert is the many windmills that are scattered throughout the landscape. The San Gorgonio Pass is one of the windiest places in California and one of state’s three major wind farms.

There are about 4,000 wind turbines in total that line the sides of the freeway. The largest of the wind turbines stand at 150 feet tall and have blades the size of half a football field. They can produce enough energy to power all of Palm Springs and the Coachella Valley. If you would like to get up close to the turbines, tours are offered through Palm Springs Windmill Tours.

I hope this has helped in planning your trip to Southern California’s desert. It is truly a special place. I’m sure you will come across many other locations as well. Sightseeing around this area is best done by renting a car – add in a girls’ getaway trip to Las Vegas while you’re at it. If a longer journey around the U.S. of A. is a dream, you can also contemplate going on a road trip along the Oregan coast. Now go get that perfect Instagram shot!

Hi! I’m Meghan, author of travel blog, Travel Worth Telling. I’m a California native, born in San Diego and living in Los Angeles. I work full-time as a hair colorist and believe there’s no reason why one can’t have a home base and travel regularly. Travel Worth Telling is a place to share travel stories and adventures, as well as a place to come for tips, itineraries and suggestions. I believe travel can be both frequent and affordable if done right and I hope Travel Worth Telling can be used as a resource to those new to travel or anyone just wanting to learn more about the world and what it has to offer.