Budapest is known for many things- it’s a great European getaway filled with mouthwatering food, beautiful views, and great history. Split by the Danube, Budapest actually has two different sides and vibes- Buda and Pest. Both sides have wonderful views and is a photographer’s dream.

So, if you’re like us, and tend to carry your camera everywhere with you, then you’re going to love this handy list that has the best photo spots in Budapest.  Regardless of whether you’re looking for a 2-day itinerary in Budapest or live here.

With that said, here’s a handy guide when planning your photoshoots across the city.

Get a Budapest City Card. Not only does it allow you to travel around Budapest easily with free transportation, but also free entrance to 19 museums and discounts up to 50 % at baths, sights, churches, museums, restaurants, bars, sightseeing tours, boat trips, concerts, and sights.

Chances are that this beauty is already on your list, but if, for some reason, you have missed the memo, you’ll be happy to know that Fisherman’s Bastain has best photo spots in Budapest, and you’ll most likely find Instagrammers and photographers alike waiting for their turns to take the perfect photo.

TIP: Go before 9 am, and you’ll have access to the place without having to pay the 4 euro fee. That said, the views are wonderful and definitely worth the money if you end up going later. The only downside of this would be the crowds that start showing up around 7 am or so. 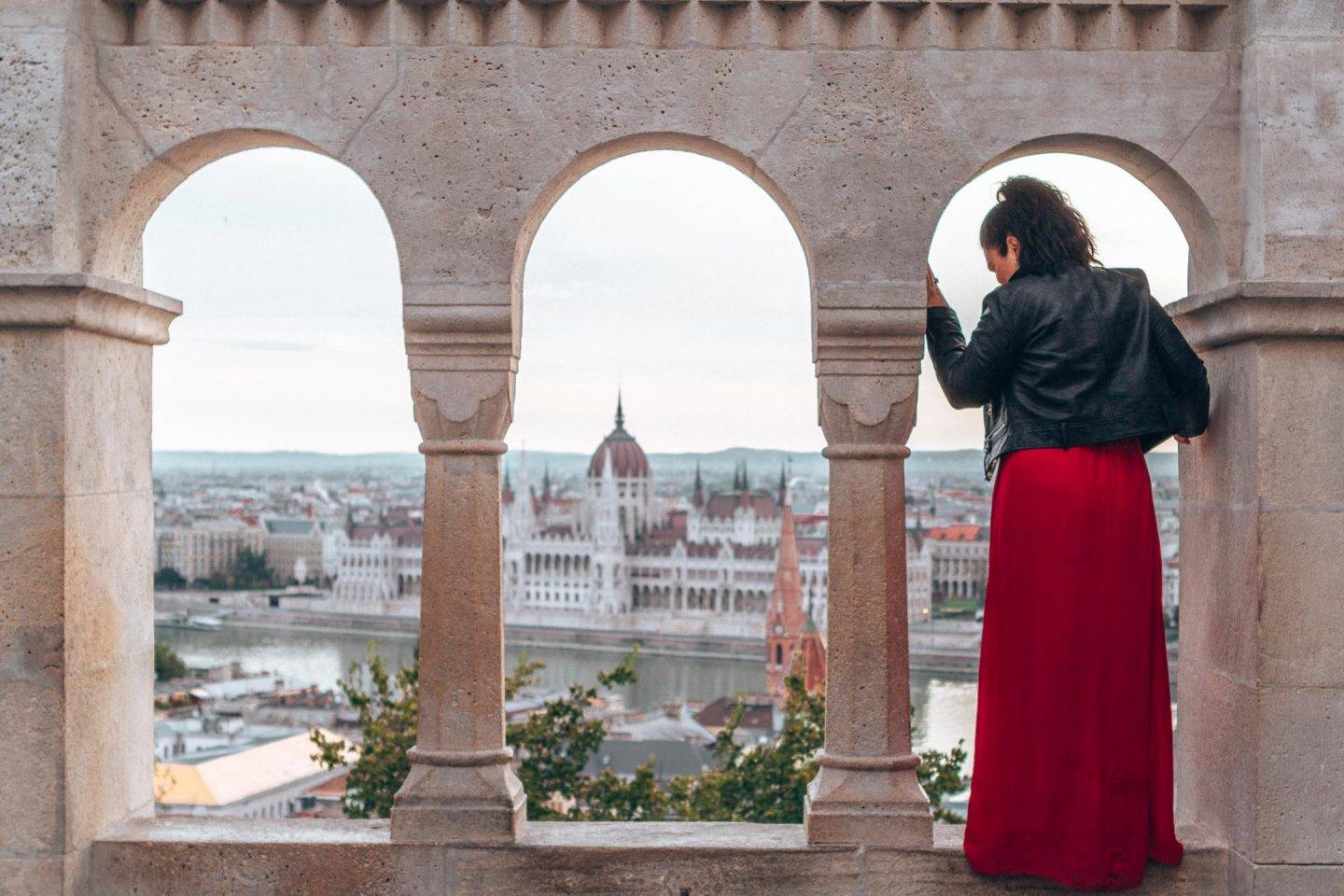 Located right because Fisherman’s Bastion- chances are that you’ve seen this beauty on Instagram already, and didn’t really know that it was a different building. The intricate details make it one of the instagrammable spots in Budapest, and one that all photographers will love.

TIP: Again, go early (before 9 am) because you’ll be able to get some of the best views of the church from the tower on Fisherman’s Bastion.

You can’t come to Budapest, and not explore the intricacies of Buda Castle. Sitting as the crown jewel that it is in Buda, it shines not only during the day but also at night. TIP: Take the funicular up because the climb up is a bit steep, and try getting there a bit before sunset so you can explore the grounds before watching the Pest side magically light up.

While there, before sure to walk over to Fisherman’s Bastain to capture the Parliament in all its glory as well.

TIP: Entrance to Buda Castle is free with the Budapest Card. We highly recommend getting one because that also covers transportation as well. 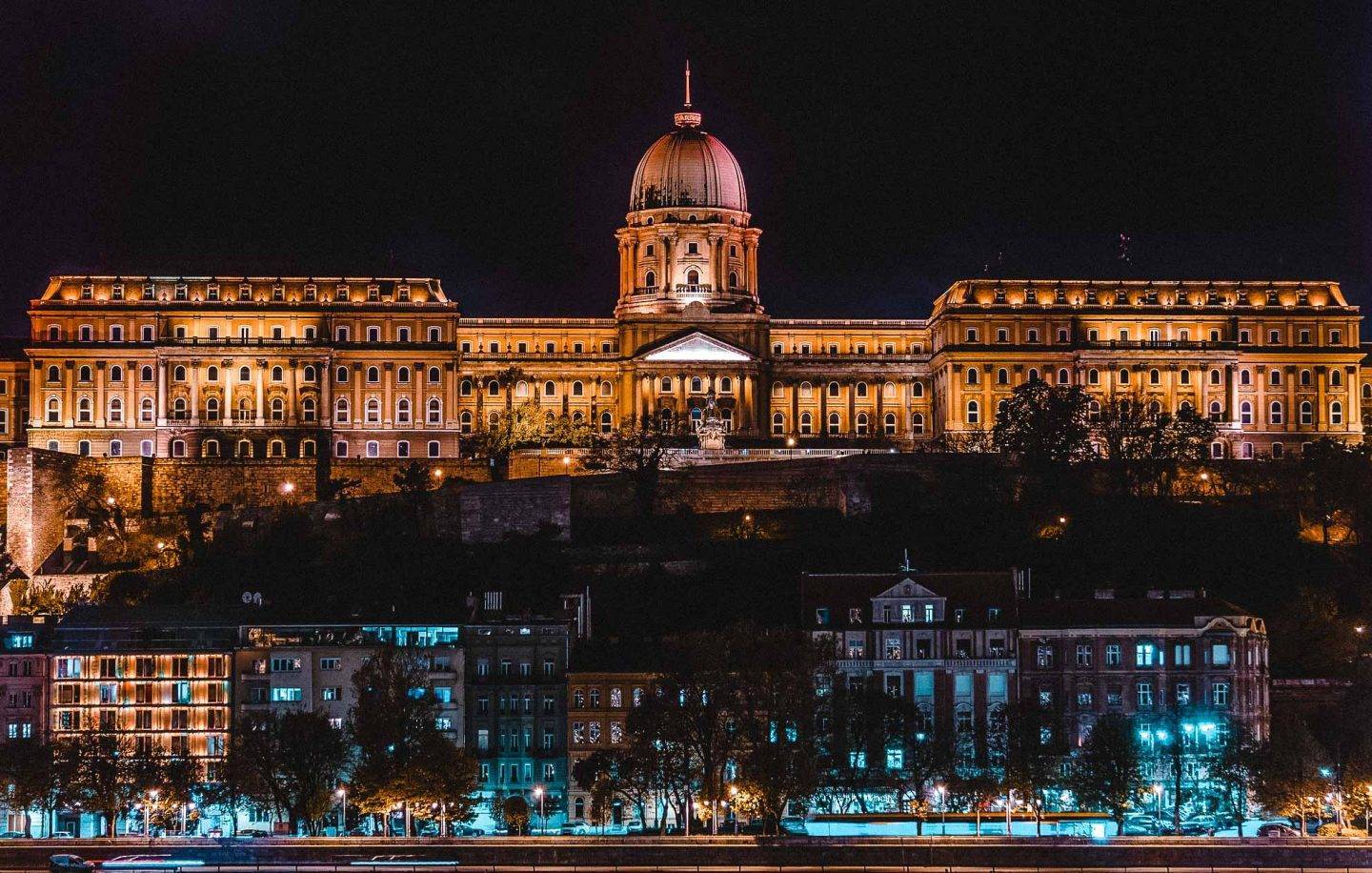 One of the prettiest buildings along the Danube makes it really to hard to miss the Parliament. It’s hard to not take a great photo of this gorgeous building- regardless of whether you’re right beside it or across the river. Once there, you’ll see why this is considered one of the most instagrammable spots in Budapest.

TIP: Take the 2 subway or metro M2 line and get off at Kossuth Lajos Tér.

Chances are that you’ve already seen the iconic framed shots from this location already. Named after Hungary’s patron Saint, Saint Stephen, the Basilica is one of the more grand buildings in Budapest. Flanked by two buildings, the alley facing St Stephen’s Basilica is the one that almost all tourists try to capture.

TIP: Bring a zoom lens if you can to capture the building and the subject properly. We shot with a 24-70 and it provided us with adequate compressing so the building didn’t look too small in the background. We also got there around 8:30 am on a Sunday and were lucky enough to have the place to ourselves for a while.

While not the photographers’ dreamland that are abundant around the rest of the city, the Great Market Hall is a lovely gem where you can easily capture all the delicacies that Hungary is known for. The hustle and bustle add a bit of electricity to any shot. Be sure to look up, and capture the stunning design in the ceiling.

It’s extremely hard to not find great views across the water. The Danube is full of stunning scenes, and breathtaking architecture- from Buda Castle lit up at night to the Parliament across the water- the sights are out of this world.

Named the “prettiest cafe in the world” when it first opened, this Hungarian institution is a must-visit for all photography and architectural lovers alike.

TIP: While the long lines to get into the cafe may deter some, true insiders know that you can easily make a reservation online so you can skip spending your time waiting in the queue- especially if you only have 3 days in Budapest.

Named after Saint Gerard who was thrown to death from the hill, Gellért Hill is a 235 m high hill overlooking the Danube and part of 1st and 11th Districts.

You get some of the best views of the Pest side of the city, especially at night. You can take Bus 27 all the way up Gellért Hill, or walk up because it only takes 20 minutes and covers more sights.

TIP: Bring a tripod because this is the spot to get some great long exposure shots.

Connecting the Buda and Pest side, the Széchenyi Chain Bridge is a sight to see, and one that should be on top of every best photo spots in Budapest list. The thing that we love about is that you can’t take a bad shot here, and both night and day versions look just as great.

TIP: If you’re looking for that perfect reflection shot, head to where the riverboats are docked early in the morning. With the right light, you can get away with your iPhone.

Originally named Ferenc József hídSzabadság híd, it is the third southernmost public road bridge in Budapest and located at the southern end of the City Centre.  What you will notice is the constant buzz of activity surrounding this bridge because its two ends are public squares, Gellért tér and Fővám tér. 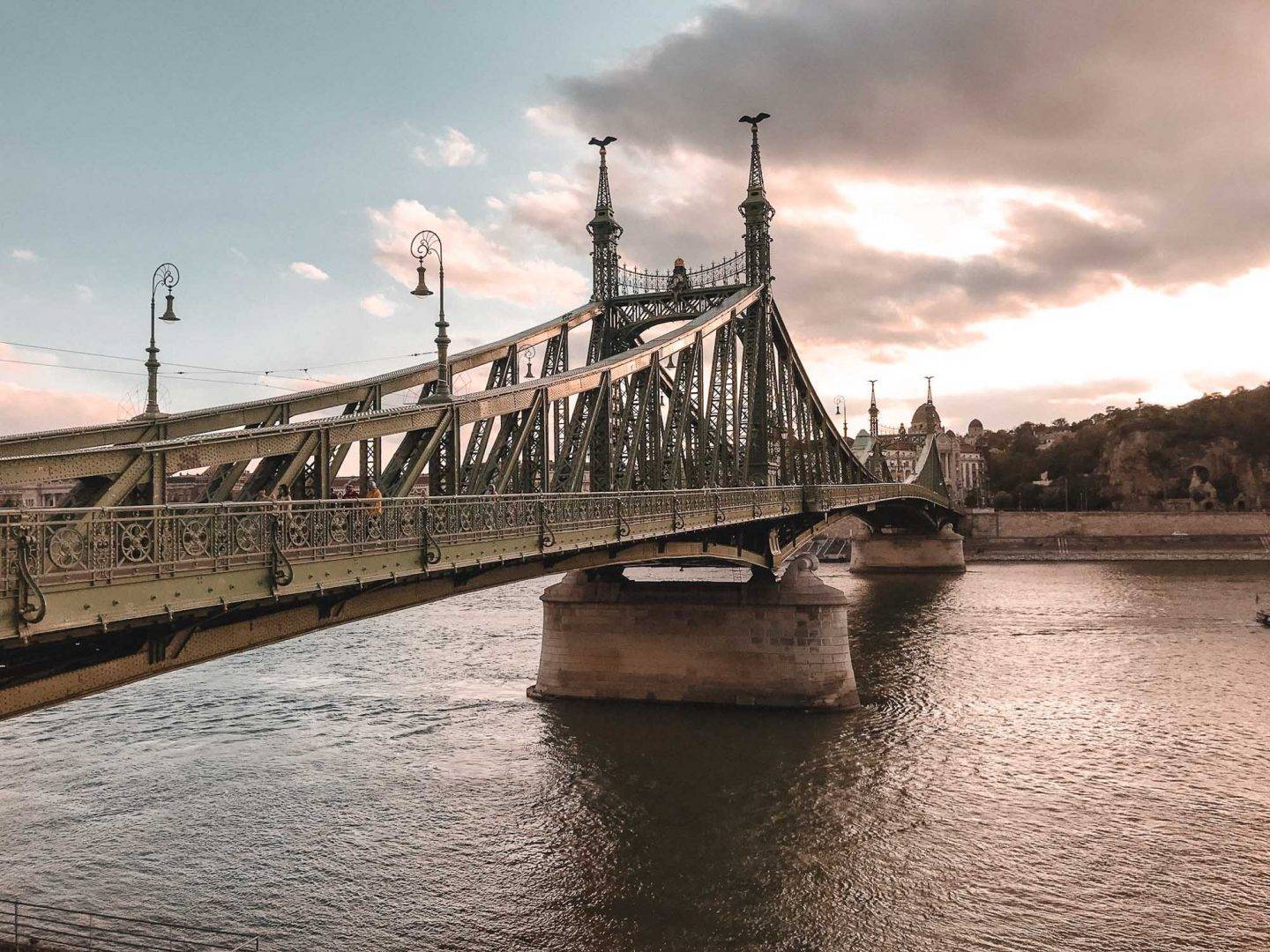 One of the more visually stunning sights in all of Budapest, Heroes’ Square is a delight to capture and is one of the major squares in Budapest making it one of the best photo spots in Budapest for photographers. The complex is most notably known for the Seven Chieftains of the Magyars as well as other important Hungarian national leaders. You’ll also find the Memorial Stone of Heroes, otherwise known as the Tomb of the Unknown Soldier.

TIP: The open-air square is easiest to capture in the early morning light (possibly an hour or so after sunrise). 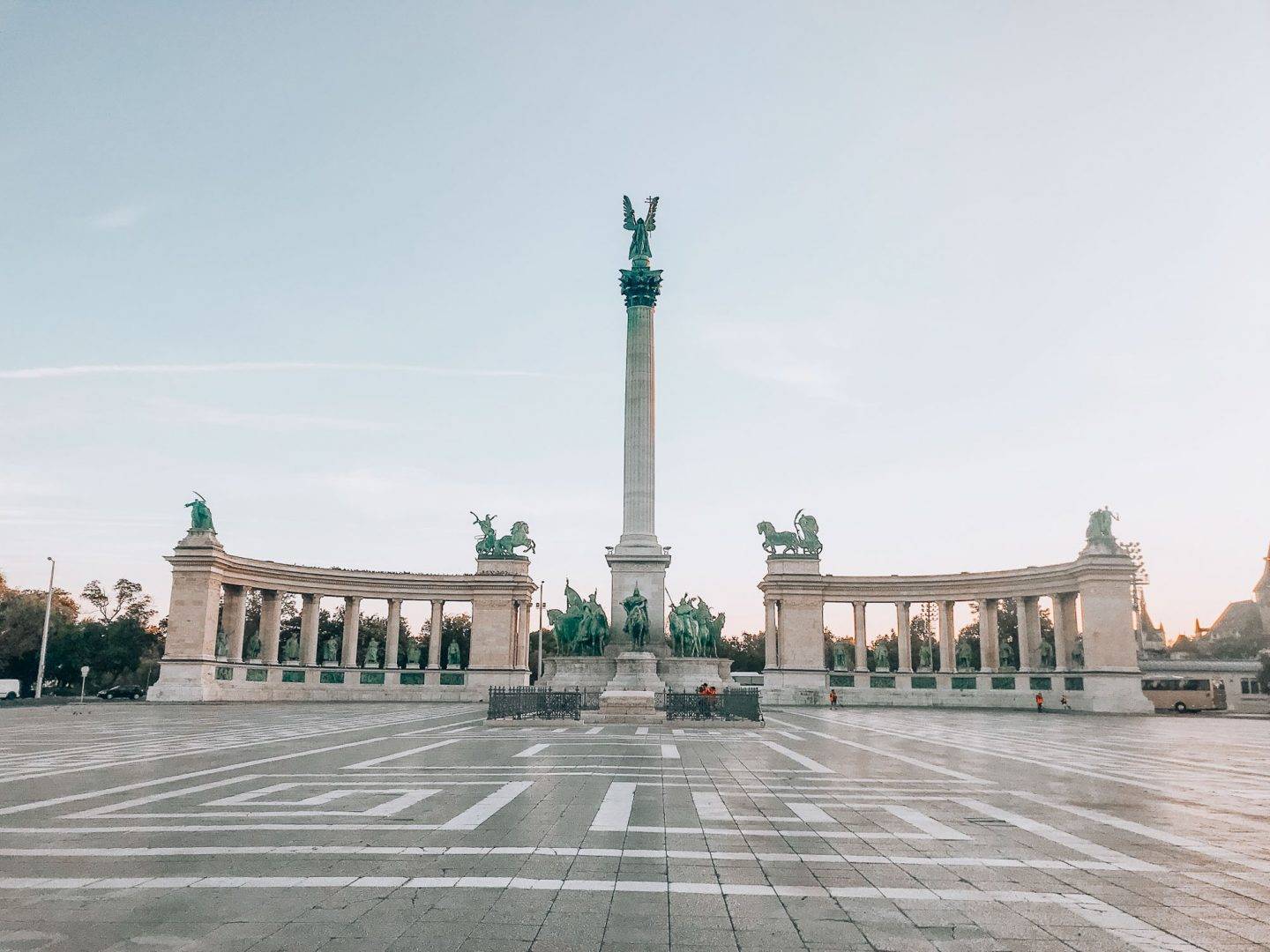 Built in 1896 as part of the Millennial Exhibition inside the City Park in Budapest (and a quick 5 min walk away from Hero’s Square), the Castle is more than worth checking out. Each little corner offers its own delights and is full of gems for any photographer to capture.

Inside you’ll find the  Museum of Hungarian Agriculture, the biggest agricultural museum in Europe. The best thing about Vajdahunyad Castle is that most people don’t make the trip out there, making it a hidden gem, but one of the best photo spots in Budapest and will fit right into your 3 day itinerary in Budapest as well.

Located about 45 mins away by public transport means that getting to Óbuda can be a bit of a time commitment, but if you find yourself with a few extra free hours, or want to capture the beautiful town center that most people haven’t visited yet, then this trip is worth your time. While there, take your time exploring this hidden gem, and stop and grab a coffee as well.

You can’t come to Budapest and not experience a thermal. That’s basically the rule. The same rule applies to any best photo spots in Budapest list or best instagrammable spots in Budapest list. There are many baths, but this is one of the best ones, and most likely the one that you’ve seen whenever you google Budapest.

TIP: Go early (the baths open at 6 am), and make sure that you’re respectful and don’t get people in your shots without their consent.

If you’re looking for something a bit different, or want to marvel at the intricate details that make Gellért Baths one of the exquisite baths in the city, then be sure to add this beauty to your list. Located inside the  Hotel Gellért in Buda, the Gellért Thermal Baths and Swimming Pool is located steps away from the Liberty Bridge (Green Bridge) and is extremely easy to get to.

Housed in the 19th-century neo-baroque Wenckheim Palace, the Fővárosi Szabó Ervin Könyvtár is the largest library network in Budapest, Hungary, and probably the prettiest library that we’ve ever stepped foot in, and more than worth a visit, but please remember to be respectful as it is a working library and students will be studying in there. You will also need to purchase a tourist ticket for 200huf to enter the building.

So ruins are a thing, and if you’ve been to Budapest- you already know that. That said, while most people tend to visit these haunts at night, we urge those with creative visions to pop into them during the day because there’s potential to capture some really different shots that you can’t easily find on the web.

TIP: Go there as soon as it opens (which is noon on most days) so you can have room to shoot without people in your shots. 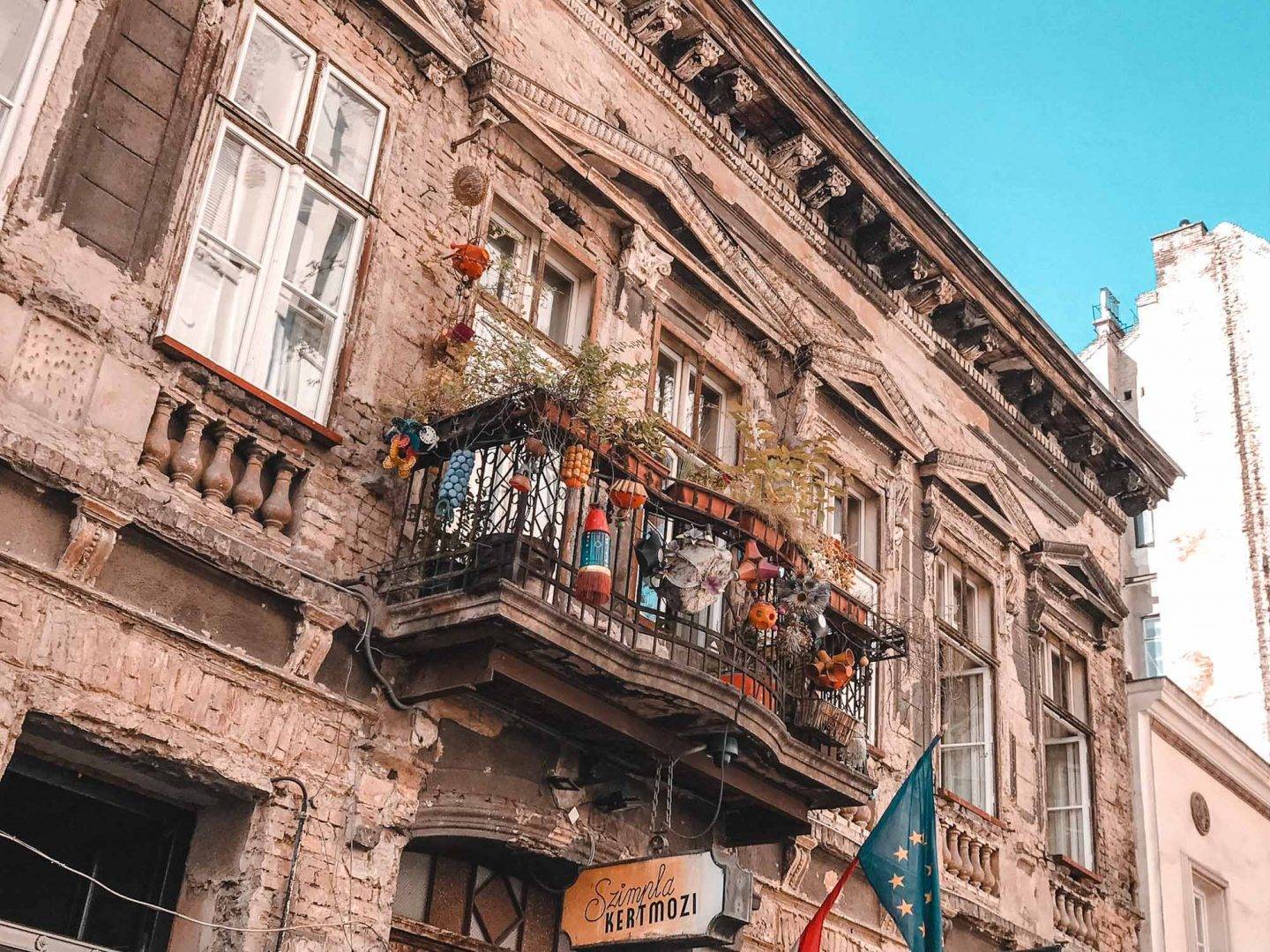 Our photography set-up to capture the best photo spots in Budapest:

SONY A7RIII: One of the best cameras on the market. Not only is it lightweight (mirrorless for the win!), but it also produces some of the best images as well. Regardless of whether you’re looking to shoot the best photo spots in Budapest, or just want a tool that you can easily on all your trips with you- then beauty is the one we recommend! Get the best price here.

SONY 16-35 F4: Our favorite lens and one of the most versatile options for landscape and travel photographers out there. This is the only lens we carry on 90% of our trips. Get the best price here.

Canon 6D: A great camera for those who want to take their photography to the next level but don’t want to invest in a full-frame yet. We love the colours out of the Canon processor.  The key thing to know is that this camera has a cropped sensor meaning that you’re not going to get the full mileage out of your lenses. Get the best price here.

Canon 24-70 F 2.8: One of the most versatile and best travel lenses. It’s no wonder almost all brands have this focal length as one of their top sellers, and the tool to have with you if you want to get the most out of the best photo spots in Budapest. Get the best price here.

iPhone: Cellphones have come a long way, and these days you can capture some great shots on your phone. I bet you can’t tell which of the above images were taken on an iPhone.

Regardless of whether you have 2 days or a full week, Budapest is full of some of the best sights in all of Europe. Hopefully, this list will help you capture a few masterpieces to add to your collection.

Obviously, this list of the best photo spots in Budapest is not complete but should get you started and help plan your time in Budapest.